History and The Pub

"The George Hotel" in Queen street has a claim to be the last surviving eighteenth century public house, in Portsmouth. It appears in the Portsmouth directory of 1784 as a tavern and the only other entry still surviving is the Dolphin Hotel, which appeared as an inn. At one time, it was a stopping place for coaches leaving the inns of Portsmouth (now old Portsmouth) to pick up passengers in the new residential area of Portsea, to go to London.

In 1905 the name was changed to the King George, but during restoration it was decided to return the premises to the original name. It is not to be confused with the inn called : “The George”, formerly located in Old Portsmouth, where Nelson breakfasted before leaving for Trafalgar, was regrettably bombed in the last war. Never-the-less, this George being so close to the main dockyard gates, has seen even more of the comings and goings of Maritime everyday life and has many tales to tell. The pictures in the bar try to capture the feeling the place may have had, the time after Trafalgar, both jubilation and sadness, a battle won, a hero lost.

Perhaps here, more than in any other public house in Portsmouth, the feeling of the eighteenth century can be captured and enjoyed.

Between the two original buildings was a courtyard, a most usual place for a well where it could be shared by two properties. When the yard was enclosed around the end of the last century, the well was covered over but fortunately was not filled. The floor was then boarded over. When the cellar was extended during the restoration the well was found and made into a feature as you see it now. The bottom of the well is 40 ft below ground level, the surface level of the water is 12 ft. The water level rarely changes and remains fresh to this day. 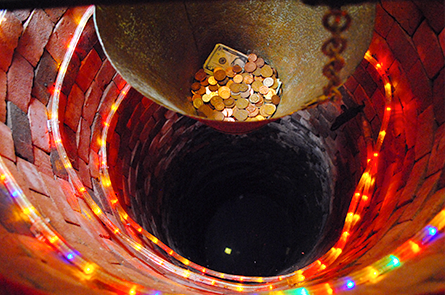 " The pictures in the bar try to capture the feel, the place may of had after trafalgar, both jubilation and sadness. A battle won, a hero lost. " 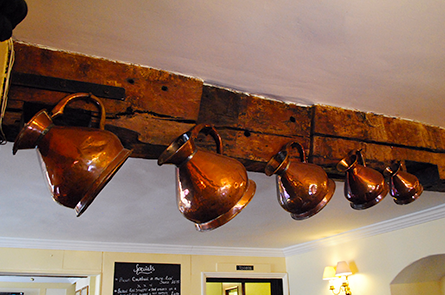 When the building was altered last century, two walls were taken out at the lower level and supported on large oak timbers. At the time oak was available to the building trade from the last of the 'Wooden Walls" being broken-up in the dockyard. One of the timbers bears the name "ARIADNE" carved into its side by a shipwright to permanently mark it's long wait throughout the shipbuilding process. The carved-rope timber was one of many that were once gilded and graced the upper deck of the Royal Yacht, Victoria and Albert III.

" One of the timbers bears the name "ARIADNE" carved into its side by a shipwright to permanently mark it's long wait throughout the shipbuilding process. "

Isambard Kingdom Brunel, the famous designer of ships and bridges was born close to The George in what is now called Britain St., a stone marks this place. Charles Dickens, the famous novelist was born in Portsmouth, in 1812. The house is now a museum. A few months later his family moved to Hawke St. In Portsea on the corner of which The George Hotel is situated. The house was destroyed by enemy bombing and Codrington House now covers the site.